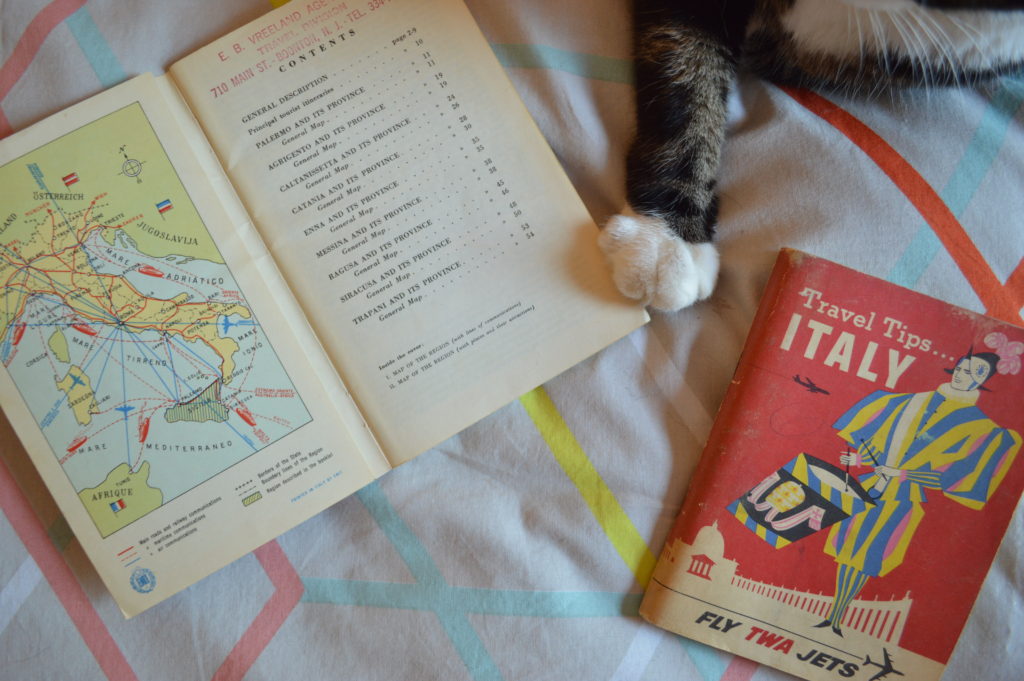 My parents have always had old maps hanging around the house. Most were (and still are) in the living room. As a child I thought to myself, Yes, of course, this is the room where we hang all of our maps. Where do other people keep theirs?

As I got older, I realized that having entire hallways dedicated to showcasing prints of old maps from around the world was a little (perhaps a lot) out of the ordinary. And I came to appreciate not just the aesthetic appeal of the maps – with their delicate twisting lines and simple typography, matted with navy blue and burgundy and placed in gold frames – but the feelings and ideas they evoke. They always seemed to me to be a piece of the old world, the excitement of discovering new places, the simplicity of lines on paper signifying so much more. They brought an intellectual, worldly flavor to our home, as much as any piece of original art would.

So, wordlessly, I decided to start collecting my own maps. I began with a little fold-up map of far north Great Britain, which I found in a used bookstore in Wales a few years ago. The front cover is finely decorated; it’s in an attention-grabbing bright orange and navy color scheme. It looks kind of cool – definitely vintage. Inside, the map itself is mounted on worn linen, and…it doesn’t look like anything special on first glance. Yup, that’s a map all right. But wait – the altitude of every square inch of land and sea is carefully noted with squiggly shapes and shaded according to elevation. The “recommended throughways” cut across the sandy landscape like veins. Every footpath, every body of water, every hamlet is included and labeled in the tiniest hand. The water is a clear blue. The scale is marked carefully with dots around the whole border. And it’s big. This is a piece of art, unquestionably.

Then, at my favorite annual used book sale of all time (which has now sadly ended, after having gone to it every year of my life), I combed through every book at the travel table. There were lots of Rick Steves and other lightly used and slightly out-of-date travel guides, along with souvenir books from all over Europe, but there were also vintage pamphlets and strange little books. Among them I found a complete plan of Paris, listing every street in the city in alphabetical order (how would one use this??) and including tiny maps of each arrondissement and of the metro system, which is a 5 by 7 riot of color. Perhaps my favorite is a small guide to Sicily, part of a series of guides from the Italian State Tourist Department released sometime in the fifties. The front and back covers fold out to reveal richly colored and detailed maps of the island and its landmarks that look just like the kind of thing artists make and sell on Etsy today. For just one dollar I picked up two lovely prints full of character – how can you beat that? (You can’t).

A side note: another Italian guidebook I found is less visually stunning but is full of such quaint little tips that I had to share. For example: In the glossary of food and drink terms, “Spaghetti alla Carbonara – Spaghetti with bacon, egg, pepper. Very spicy.” In the tips for women travelers section: “In Europe handshaking is much more common than in the United States. A woman should allow a male acquaintance to shake her hand, but never shake his. Women shake hands, too, the younger doing the shaking. If the same age, a handclasp is enough.” In the sightseeing section for Rome: “Trevi Fountain – Just behind the Quirinale, near the center of the city…The legend is that a coin tossed in the fountain insures your return to Rome. The fountain was an important accessory in a motion picture called ‘Three Coins in the Fountain.'” (Which, for the record, is an excellent, ridiculous movie that I have watched on more than one occasion. It’s on Netflix should you be tempted.)

So, in the era of GPS, aren’t maps the new vintage poster? The new art print? They exist in countless iterations for every country past and present throughout time. You can get them for a dollar or a lot more than a dollar; they can be huge or postcard sized; they can be of your home state or the place you’ve always dreamed of visiting. They’re a mathematical rather than representational view of the world, and a welcome juxtaposition against portraits, still lives and paintings. They remind you of where you’ve been and where you have yet to go. Put a map on your wall, and see if it starts to look like art to you, too.