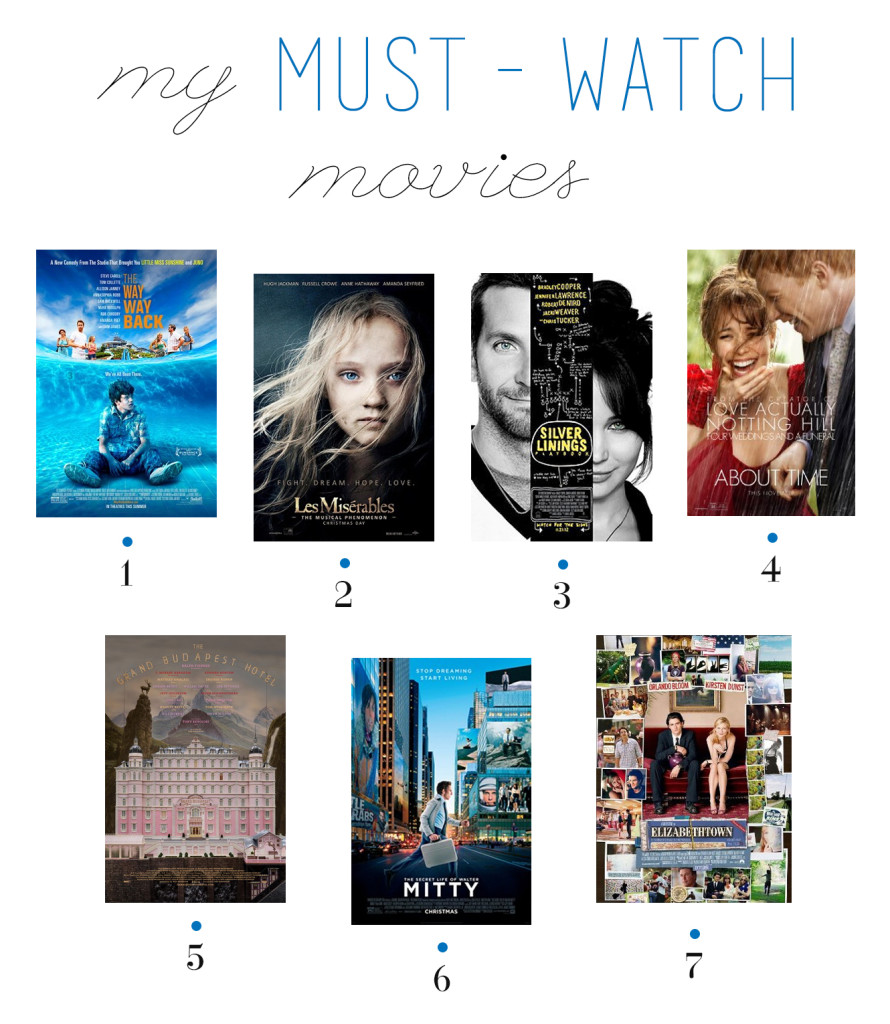 Do you have those movies that you just can’t help but watch, even if you own them/have seen them a thousand times? My little collection has grown over time (thanks HBO and Showtime for eating up hours of my life). Even if there’s that new TV show I want to start…or work to be done…or even if I’m in the middle of another program – if I see one of these is on, I have to watch it. I totally can’t resist – I know they’re going to make me laugh or cry or feel instantly better. They aren’t necessarily my all-time favorite movies (although The Way, Way Back and Silver Linings Playbook are certainly on that list), but they’re good enough and different enough that I’m pretty much always in the mood to watch one of them, and there’s almost always one of them playing on TV or available on demand. They’re pretty mainstream, but I thought I’d give a quick rundown of my seven must-watch movies (to convince you to watch them if you haven’t already).

1 // The Way, Way Back: My dad and I are kind of obsessed with this movie. (In all honesty, I watch it – or at least parts of it – several times a week. It’s a little insane.) I first watched it a long time ago and sort of forgot about it, but watched it again when it started popping up on HBO – and I sort of fell in love with it. Owen is one of my favorite characters ever, and the more you watch it, the more you pick up on – it really gets better every time you watch it (which is kind of hard to believe). It is seriously hysterical and surprisingly touching. If you haven’t seen it – watch it. Now.

2 // Les Misérables: I can’t imagine that anyone hasn’t seen this adaptation yet. It’s heart-wrenchingly sad, and I never make it through without crying. And the music…man, can those guys all sing.

3 // Silver Linings Playbook: This one’s also pretty popular, but for good reason. So much awesome dialogue and acting. And the dance scene at the end will never not be funny.

4 // About Time: I kind of got sucked into this movie by accident. I was having a bad/weird day, and this came on after another movie I had been watching (undoubtedly another one off this list). I had totally thought this was one of those horrendously cheesy Nicholas Sparks-esq movies, but it’s surprisingly not. I mean, it is a romantic comedy, but it’s also sci-fi – the movie is actually about the concept of time, as the title says. The whole romance only takes up the first half hour or so, and there are some cheesy but valuable life lessons mixed in. It’s such a lovely movie, and I bawl hysterically at the end.

5 // The Grand Budapest Hotel: This movie is aesthetically perfect. And the whole plot is quirky and bizarre and funny, which matches perfectly. Again, something you need to watch now if you haven’t already.

6 // The Secret Life of Walter Mitty: Two things regarding this movie: one, the soundtrack is perfect. Two, it feeds my wanderlust like nothing else. Let that be a warning.

7 // Elizabethtown: This is kind of a bizarre movie, and one I came across by chance – I’d never actually heard of it before. It’s funny, and a little weird – Kirsten Dunst’s character is strange and amazing – it’s a unique movie about family and optimism (I suppose, that’s basically what I took from it).

Images from Wikipedia and IMDb 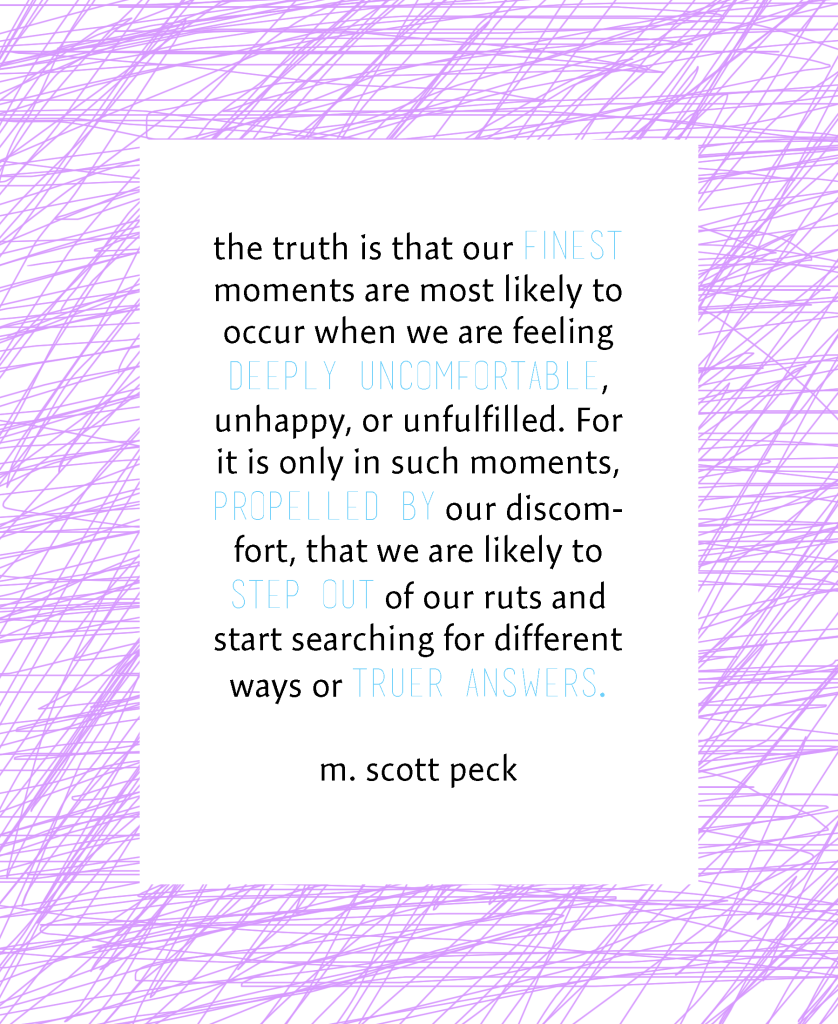 Apologies for the radio silence. It occurred to me that I didn’t post for the entirety of March. I promise you, though, that I have lots of good reasons – but I won’t drag you through those. To make a long story (or, rather, series of stories) short, March kicked my butt. I attribute it to the time of the year, partially because the weather still generally sucks in Baltimore, and there aren’t any holidays to break up the routine. I faced crippling piles of work (what else is new), some totally packed weekends, and, of course, (inevitable) stupidness in my personal life.

I’ve probably said it on here before, but the end of winter, February-March time of year is always rough for me. In years past, it was usually just stupid teenage drama and me making bad choices, but now it’s becoming a time of significant, personal change (for no apparent reason). I always emerge from it knowing myself a little better – but I think that’s what bothers me the most, that I still don’t totally know myself. I’ve become less averse to change over time, but going through it without my meaning to is always a little jarring. I also had a bout of depression, a recurring problem I thought I’d finally dropped, so I’ve barely been functioning up until yesterday.

So naturally, I talked to my mom, and what she was the same thing as this quote, which I ran across in this cookbook, of all places. I love it, and I’m taking it to heart: I’m making changes, probably the biggest of them being becoming a vegetarian. I went cold turkey (or cold tofurkey, as the case may be. Ha.) this week, and my favorite farmer’s market is opening back up this weekend, which will undoubtedly make the transition easier. I’m on vacation for a while now, so I’m looking forward to spending time outside, blogging more, relaxing, and heading up north for a few days (I’ll be hitting Boston, so be sure to follow me on Instagram!). Spring is indeed a time of renewal, and I plan to take advantage of it (God, sorry for trite that was).

So there you have it, my little cathartic release of thoughts, which aren’t really relevant but I felt like sharing anyway. I look forward to talking to you all in the weeks to come! 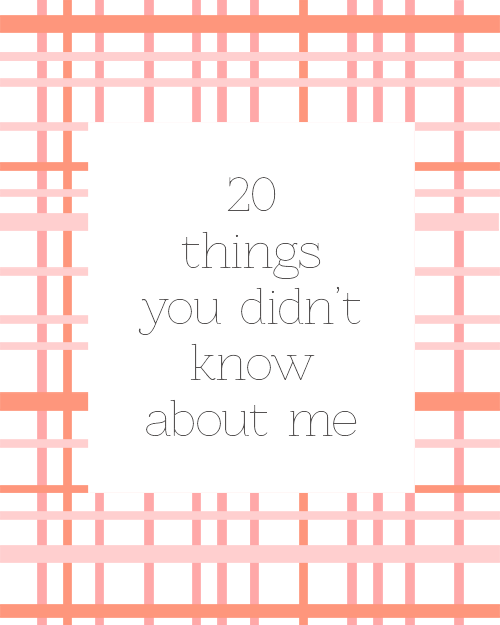 5. It is my dream to meet David Sedaris. (I went to hear him read once, and plan on doing so again this year.)

6. I know all the words to La Vie en Rose and I sing it quite often (in French, obviously). And I whistle it. Every day. All the time.

7. That leads me to a few more: I speak French pretty well (not fluently, but enough to understand Stromae songs – and that’s all that really matters, right?), and I forced myself to learn to whistle – it took several (painful) months of blowing semi-noiseless air out of my mouth, but it’s now one of the greatest joys of my life (WOW does that ever sound sad).

8. My favorite eras are mid- to late- 19th century Russia, and, of course, early 20th century-Jazz Age New York (and the expats in Paris).

9. I can recite an episode (well, probably a few) of spongebob from memory (but who can’t, right? Oh, okay, it’s just me).

10. I was once (briefly) a barista at Starbucks.

11. I just celebrated my 1 year anniversary of being single (woohoo! Go me!).

12. I have one sister who is definitely my best friend.

13. I collect copies of Alice in Wonderland- I currently have 19, most vintage, one in German and one in Jerriaise.

14. That being said, I hoard books. And I’ve been known to pick up books written in languages that I don’t even speak (like Turkish and German – but hey, the cover was pretty)

16. I love cheese and I hate bad grammar (intensely. Like down to when people don’t use the subjunctive mood when they should.)

18. One of my favorite books is Franny and Zooey – I relate to it really strongly.

19. I am super into linguistics. 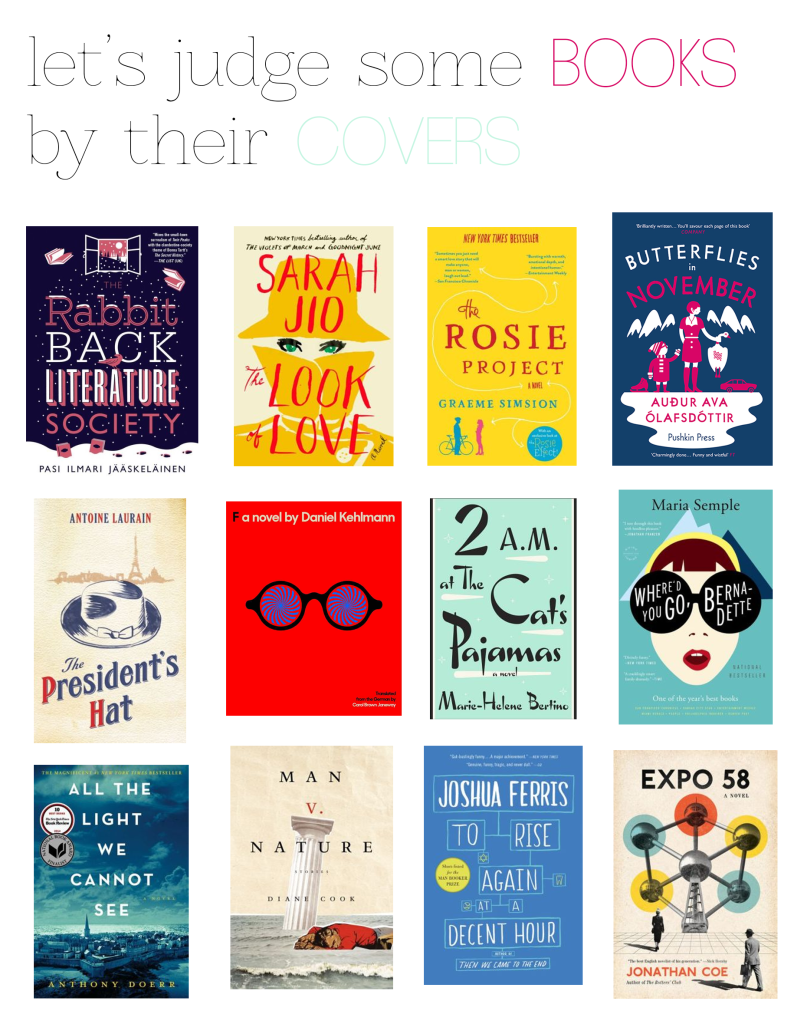 I hoard books. Especially pretty ones. Be they old or new, I judge books by their covers. Obviously I’ll only buy a book if it sounds good, but covers are what draw me in (please tell me I’m not alone in this). It’s becoming a serious problem. Thankfully, it only rears its ugly head when I’m simply browsing rather than looking for a specific volume. I thought I’d share my latest finds that sound enticing in addition to being aesthetically pleasing.

I’d love to know – what books have you recently read (or are on your to-read list)? Do you judge books by their covers? 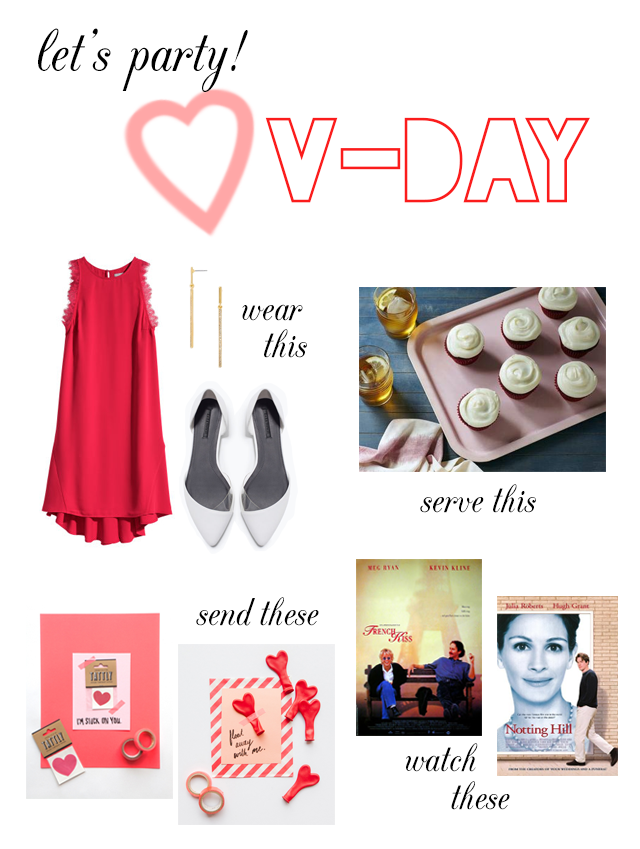 More newness! Introducing party plans – little monthly plans for low-key entertaining. I’ve always been so enticed by the idea of throwing parties for myself and some close friends, but sadly, I don’t usually get the chance. So I’m bringing my unfulfilled party dreams here!

Wear // Valentine’s day is basically just an excuse to deck out in red and pink. This dress is cute, cheap and flirty, and works year-round – but looks especially V-Day appropriate with chic flats and simple gold earrings

Serve // Red velvet cupcakes are a total crowd-pleaser (they happen to be my favorite). They’re simple but decadent, fit perfectly with the holiday’s color scheme, and the single-serve portions make it an easy, un-fussy dessert to serve.

Send // I always love the idea of sending actual paper invitations, but it seems especially fitting for a Valentine’s Day party – there’s already the long-standing tradition of sending Valentines, which I’ve always thought is an extra-sweet notion. These punny options from Oh Happy Day are a creative and cute way to send your girlfriends the details (even if you’ve already texted/emailed/talked to them about it).

Watch // Would the holiday really be complete without romantic comedies? Maybe for some (namely those who have significant others), but not me. I’m a sucker for a good rom-com. These are two of my favorites (er, Notting Hill and anything with Meg Ryan in it) – but obviously, any would do (Pretty Woman also comes to mind).